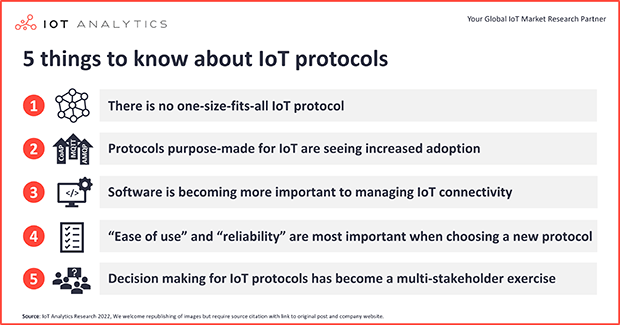 5 things to know about IoT protocols

why is it important

There are currently 12.2 billion active global IoT connections. This is where the power of IoT lies. A myriad of interconnected devices communicate with each other and produce meaningful data. But being connected is not enough for devices to communicate. They must speak the same “language”. This is where IoT protocols come in.

A protocol is a set of rules that allow efficient communication (i.e. data exchange) of distinct machines/devices in a network environment. The concept is similar to the languages ​​we use to communicate. If two people do not speak the same language, the exchange between them will not be effective. Without these protocols, a digital Babylon would emerge.

Here are five takeaways from the report that paint a picture of the IoT protocol landscape in 2022.

1. There is no single IoT protocol

There is no undisputed standard IoT protocol today. This is where the complexity of the subject begins. This fact is also evident in the fact that 73% of our survey respondents indicated that managing various data formats and protocols is preventing them from scaling their projects. The IoT market as a whole is fragmented and IoT protocols are no different. There is no global standard. Some protocols dominate specific industries (for example, CAN is a staple in vehicle component communication, DNP3 is most often used in utilities, and HART is the dominant protocol used in process industries).

Yet for most projects, typically IoT ones, the choice of protocol can make or break a proper network, and there are many requirements to consider. For example, MQTT and NB-IoT (LPWAN standard) are compatible and can work together flawlessly in a stable network. However, add a poor receiving environment, and this is where the trouble begins. Are the devices battery powered? What is the size of the transferred data volume? Is the network stable? Do messages need to be prioritized? These are just a few questions to answer before making a decision. Zooming out, we can recognize a whole “ecosystem” of which IoT protocols are part.

As the image below shows, the landscape of IoT protocols can be quite daunting. This involves several layers which must be compatible with each other. The communication protocol layers (eg, connectivity, link, transport, session) are just the base of the landscape. Above them are data processing (e.g. Kafka, RapidMQ), storage (e.g. MongoDB) and finally corresponding applications (e.g. machine vision, asset management ).

Adding to this complexity is the fact that specific devices may only support proprietary protocols. These are protocols created and owned by a single organization or individual, which often makes them incompatible with other standard hardware. If so, then a protocol converter is needed. All of these different parts need to be set up correctly and configured for a functional and efficient connectivity setup. As a result, most respondents cite interoperability as an issue when asked about their connectivity setup.

2. Protocols specifically designed for the IoT are increasingly adopted

According to our research, the share of connections using protocols specifically designed for IoT setups is expected to increase by +11% over the next two years. MQTT and CoAP are the protocols driving this growth. Both meet the requirements of IoT networks in all respects. They are lightweight (low power consumption is crucial for battery-powered devices), have low overhead (smaller message size), and can operate in lossy networks (many IoT devices like sensors can be part of of remote configurations). For connections between assets/devices to middleware, MQTT is expected to have a +29% increase in connection shares over this period. However, between middleware and applications, CoAP is the IoT protocol that is expected to grow the most, growing by +30% over these two years. AMQP should also be mentioned here as another necessary IoT protocol on the rise, showing overall growth of both connection types.

This rise of IoT protocols has increased the importance of software as part of configuring connectivity. The connectivity landscape was much simpler 10 to 15 years ago. Most of the projects have been condensed on site (including analysis and visualization). In the meantime, new software has appeared to manage this connectivity. Tools like IoT platforms, brokers, protocol converters, and other such middleware are the pieces that complete the connectivity puzzle. As expected, when it comes to IoT platforms, most respondents use Microsoft Azure IoT and AWS IoT. When it comes to brokers and protocol converters, the landscape is more diverse with multiple companies in the spotlight. For example, HiveMQ and ActiveMQ are two popular brokers, and PTC Kepware and Matrikon are among the most used protocol converters.

4. “Ease of use” and “reliability” are most important when choosing a new protocol

Finding the right IoT protocol for each project’s needs is critical. For example, MQTT is more centralized and better suited for low-bandwidth remote connections. In contrast, DDS is decentralized, more versatile, and can accommodate high-performance networks. Therefore, it is essential to compare potential IoT protocols and their attributes. According to research from IoT Analytics, the ease of use of a protocol is the most influential factor. This was the most crucial trait in a list of over 20 features based on our respondents. Distinct industries, regions, and company sizes assign different values ​​to each protocol trait; therefore, many patterns can be spotted. For example, interoperability with other protocols and scalability are more important for large enterprises, while ease of DevOps is more critical for small and medium enterprises.

5. Decision-making for IoT protocols has become a multi-stakeholder exercise

These traits affect the decision process and can tip the balance in favor of a specific protocol. They must be evaluated in detail by the decision maker. According to 88% of our respondents, the board of directors/executive management has the final decision-making power. This fact underlines the importance that this decision can have for the company. However, they are not alone. Deciding on an IoT protocol is a daunting task involving many stakeholders. Based on our results, six departments are involved in this process, including IT/Technical and Finance. When looking at the separate regions, a clear difference can be seen. North American companies seem to have a more collaborative strategy since respondents are reluctant to designate a separate department as the decision maker. On the contrary, 94% of European respondents identify the board/senior management as a decision maker for a new IoT protocol.

Our point of view

The rise of IoT is driving sweeping changes in the way devices communicate with each other, and IoT protocols will only increase in adoption and importance as the number of connected devices grows. It is up to the adopters to plan well and decide on the most appropriate IoT protocol to prevent unwanted digital babylon from occurring.

A 110-page adoption report detailing the use of IoT communication protocols in the context of intelligent operations and connected products.

Download the sample to learn more about the structure of the report, the companies included, and see additional data points.

You may be interested in the following IoT market data products:

You may also be interested in the following recent articles:

Are you interested in continuous IoT coverage and updates?

Subscribe to our newsletter and follow us onLinkedInandTwitterto stay up to date on the latest trends shaping the IoT markets. For comprehensive enterprise IoT coverage with access to all paid IoT Analytics content and reports, including dedicated analyst time, check out the Enterprise subscription.