A spirit to succeed despite the loss of arms

Still, the 27-year-old from a small village in the city of Xianning in central China’s Hubei Province took the lead and never looked back.

Although there may be many difficult situations and competitors to face, you will progress as long as you work on it.

On the contrary, the loss has been converted into an inexhaustible source of motivation, helping him to roll with the blows of life and aim for the stars.

With his remaining hand, Yuan has developed ingenious designs and patents that have earned him over 60 awards and accolades that are the envy of his peers.

“One of the most unforgettable experiences is winning the Challenge Cup second prize in 2019,” said Yuan, who is currently pursuing her doctorate in computer science at Wuhan University of Science and Technology.

The Challenge Cup competition was launched in 1989 and is renowned among Chinese students as the Olympics of science and technology.

Yuan’s entry focused on developing an onboard water cannon that integrates computer vision, artificial intelligence, and object detection, all of which fall within his area of ​​expertise.

“I chose it as the project for the competition after discovering that the water cannons that existed at the time relied mainly on manual force,” he says.

“If we could provide automatic monitoring and response, a lot of work would be saved,” Yuan said, adding that it would also enable more accurate observation and more effective control of boating crime, especially at night.

His idea was adopted by his classmates, and they formed a team of eight for the contest. Yuan was elected team leader.

They got to work on the programming and design and took it to a water cannon factory in Jiangsu Province and a shipyard in Guangdong Province to test and debug their automatic operating system.

“We had to make sure that our automatic system would fit a real gun and ship, and take into account wind fluctuations and other factors that could affect the operation of the water cannon,” Yuan says.

“So field experience was essential.”

Preparation took more than a year, and after much trial and error, Yuan’s project was finally successful. It succeeded in offering real-time surveillance, as well as constant vessel tracking, alarm and strike capabilities.

The work of Yuan and his team has been approved by the Challenge Cup judges for its viable operation and great future potential.

The automatic water cannon system has since been applied in some parts of the country.

“The whole process was difficult but fulfilling,” says Yuan.

It was one of many similar experiences that enriched Yuan’s life and pushed him forward.

Yuan doesn’t remember exactly what happened to him when he was 3 years old.

According to accounts by Yuan’s parents, he was walking behind his mother who was carrying a load of laundry to be washed in a local river across a street, when a truck suddenly turned around the corner and drove off. is directed straight at him.

When his mother turned around, Yuan had already passed out and was covered in blood.

Five months of medical treatment in three hospitals finally cured him, but at the cost of his right arm.

It was a blow to his family, who were already struggling to cope.

Both of her parents had to do odd jobs to earn a living. Some relatives even suggested that his parents abandon him, given the ongoing medical expenses and the difficulties that his disability would cause.

“It was out of the question for us, even if we had to borrow money or be in debt,” says Yuan’s mother, Fang Yuan.

She did not send Yuan to kindergarten after his discharge but kept him at home, teaching him to write with his left hand. She says the idea was to make it easier for him to learn with family care and better prepare him for further education. 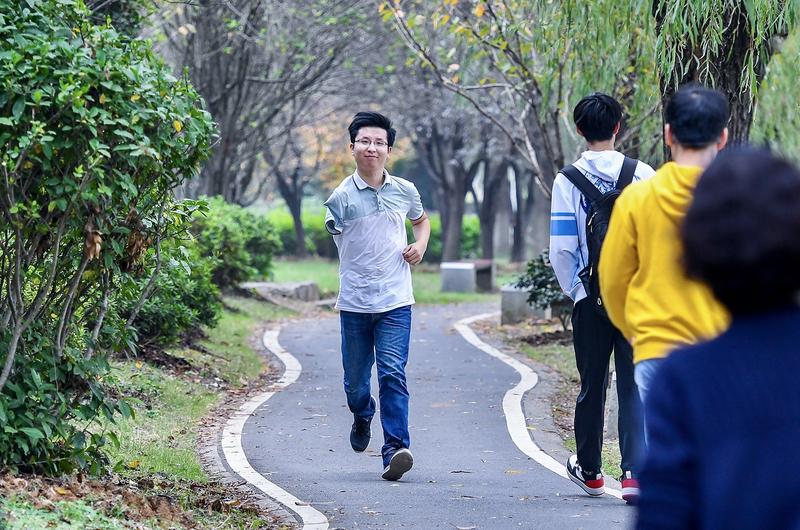 Yuan Xin, a doctoral student in computer science at Wuhan University of Science and Technology. (PHOTO PROVIDED TO CHINA DAILY)

Although Fang herself only reached elementary school, she clung to the idea that knowledge can change her destiny and hammered home its importance to Yuan.

His father was more frank with him.

“He made sure I understood that the only way for me to succeed was with my brain, rather than my muscles,” Yuan says.

It is the influence of his family’s spirit of perseverance and an attitude of never giving up in the face of a challenge that pulls Yuan through the difficulties that come his way.

Childish jokes were aimed at him when he entered elementary school. He started getting unwanted attention and some kids gave him unflattering nicknames.

“I had doubts about myself then, but my parents told me to reject unwanted noise and focus on learning,” he says.

He buried his head in his books to block ridicule and as a result his academic performance stood out.

Yuan consistently remained in the top 10 in his class in elementary, middle, and high school.

This gradually earned him the admiration and respect of those around him.

More and more of his classmates began to turn to him for help with their schoolwork, and they and the faculty members showed him attention.

In high school, her class leader helped Yuan apply for a scholarship and offered her 100 yuan ($15) per month out of his own pocket to improve his boarding school conditions.

The heat encouraged Yuan to work harder and give back.

His academic strength led him to enroll in Wuhan University of Science and Technology in 2014.

After consulting with his teacher, Yuan opted for computer science as a college major.

“I thought it was less demanding on the ‘hand’ and more on the intellectual work,” he says.

However, he had his work cut out from the start. Before college, he hadn’t even touched a computer.

“I couldn’t understand the first lesson and had no idea about the keyboard, let alone typing.”

To catch up with the class, for the next three months, Yuan spent her free time studying and practicing in the computer room of the school library.

In the beginning, he was typing the program codes from the manual for better understanding. After a year, he was able to design and develop programming codes himself.

“I’m slower, so I have to work harder and catch up,” he says.

In fact, it wasn’t long before Yuan began to show his talent and inventiveness.

When he saw keyboards gathering dust and then malfunctioning in the second half of freshman year, he thought of putting a protective cover on the keyboards.

He then spent six months studying the subject, consulting his teacher and experimenting.

In October 2015, he developed an idea and got a patent for it.

“Even for people who don’t have physical disabilities, this great achievement is hard to achieve,” said Li Kenuo, Yuan’s advisor during his undergraduate years, adding that Yuan took every learning opportunity seriously and always followed his own actions.

“He’s always the first to arrive and the last to leave,” Xu said.

Yuan hopes he will continue to learn more and can contribute to the benefit of the public and the implementation of the national strategy.

Talking about the resigned attitude of some young people, Yuan says he disapproves of it.

“While there may be many difficult situations and competitors to face, you will progress as long as you work at it,” he says.