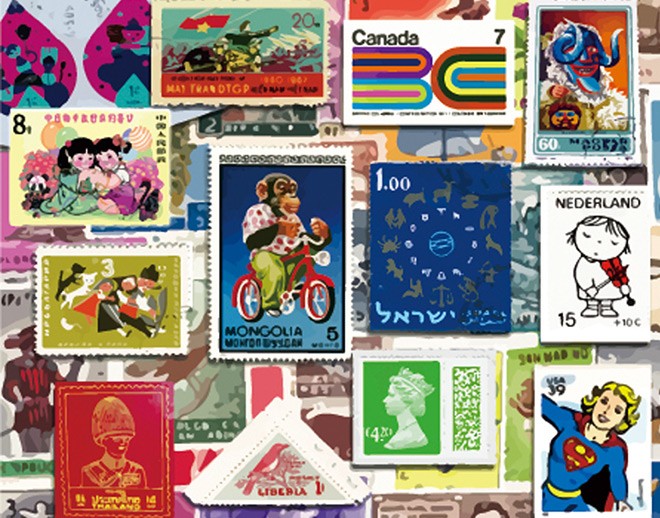 a postcard from relatives in America – with an Italian postage stamp
–Angela Giordano (Avigliano, Italy)

the end
to our relationship…
her postage stamp with a rose
–Charlotte Digregorio (Winnetka, Illinois)

under a golden ribbon
some old stamped envelopes
in the father’s office
–Francoise Maurice (Draguignan, France)

first visits of the bees
to a lot the size of a postage stamp…
the newly built house
–Masumi Orihara (Atsugi, Kanagawa)

The haikuist’s mail delivery was upended by tumultuous protests. JD Nelson listened to the sound waves of Lafayette, Colorado.

crickets at the pond
the last night of July–
radio towers

Satoru Kanematsu felt weary after the former prime minister was shot while delivering a speech in Nara on July 8. Frederick Kesner was at Osaka International Airport when he heard about Shinzo Abe’s murder. Tsanka Shishkova fell silent in Sofia, Bulgaria, mourning the loss of Japan’s longest-serving post-war prime minister. Former Prime Minister Yoshida Shigeru (1878-1967) was commemorated on a postage stamp 30 years after his death.

The summer streets are simmering
Words raised, shots fired, then silence
the cloud of smoke dissipates

instead of emoji
I sent my boyfriend
sunset

Writing from Menlo Park, California, Miera Rao inserted a negation on each line of her haiku to express the positives of a postage stamp.

Giordano hesitated to post this denial: in the drawer the postcard that I never sent you.

Charlie Smith wrote this haiku on a postcard with a “USA Forever” stamp depicting cherry blossoms on the grounds of the United States Capitol.

Kath Abela Wilson drooled over the 45-cent “Cherry Blossoms Forever” postage stamp on its first issue in Pasadena, Calif., noting that stamp collecting “was the first time I fell in love!”

Robin Rich posted a letter from Brighton, England. Murasaki Sagano took her time updating the addresses of her acquaintances and tying some strings around all the midsummer greeting cards she gratefully received in Tokyo. Kanematsu corresponded with haiku friends in Australia.

In the middle of summer–
winter greetings
from Hobart

Craving a crime thriller in Misawa, Aomori Prefecture, Patrick Sweeney rewatched a movie starring Cary Grant and Audrey Hepburn. With tears in his eyes, Suzuki rewatched the final scene of a 1970 Italian drama starring Sophia Loren and Marcello Mastroianni filmed in a field of sunflowers near Poltava, Ukraine.

Charade
when honest M. Félix says:
“For a few minutes they were mine.”

No old stamps–
in the movie “Sunflower”
Sophia Loren’s Tears

Paula Sears may well have waited in line behind a neighbor she knew in Exeter, New Hampshire. The talented haikuist, however, was referring to an adhesive postage stamp worth a penny in 1840 which depicted Queen Victoria’s profile against a black background.

first in line
at the post office
Penny Black

Samo Kreutz listened carefully to a message delivered in Ljubljana, Slovenia. Stuck in a medical office, Mona Bedi learned to escape from Delhi, India. Going through her stamp albums, Anna Goluba said she could “let everything else go for a while” in Warsaw, Poland.

arrived safely
without any postage stamps–
the song of the troglodyte

confinement
I travel the world
with the clouds

the silence
at the war memorial
we fought for this peace

Pat Geyer received a card with the image of a duck in East Brunswick, New Jersey.

free of shipping
when drawn in pencil–
Mothers’ Day

nice day
a set of floral stamps
I miss the garden

Elena Malec hosted a rainbow of shades in Irvine, CA.

Alan Peat gave up stamp collecting but not unrequited love in Biddulph, UK.

Posting a letter from the island of Vis in Croatia, Zeljko Vojkovic dispelled the adage: sealed with a lick because a kiss wouldn’t stick.

love letter
the postage stamp is pasted
with a kiss

In these two haiku moments from Evetts, he tried to convey feelings that would become universal truths for the reader. The first sounds like a proverb, a fleeting thought. The second managed to capture the essence of a real experience.

postage stamp
the things we appreciate more
when used

his collection of stamps…
the distant gaze
in his eyes

Vessislava Savova peeked on her doorstep in Sofia, Bulgaria.

Writing from Tokyo, Kiyoshi Fukuzawa wonders if he can still use his 20 yen stamps dated 1973. Laughing waters, a poet from Sylacauga, Alabama, heads for the beach.

Natalia Kuznetsova recalled stories of her father’s adventures away from home in Moscow.

dad’s stamp collection…
my first guided tours
around the world

Zdenka Mlinar’s father may well have been Hrvatska’s last philatelist. Every night before bed, Bedi admires small pieces of history.

The next issues of the Asahi Haikuist Network appear on August 5 and 19. You are invited to send a haiku related to insects or beasts on a postcard to David McMurray at Kagoshima International University, Sakanoue 8-34-1, Kagoshima, 891-0197, Japan, or by e-mail at ( [email protected]).

David McMurray has been writing the Asahi Haikuist Network column since April 1995, first for Asahi Evening News. He is a member of the editorial board of Red Moon Anthology of English-Language Haiku, a columnist for the Haiku International Association, and editor of Teaching Assistance, a column in The Language Teacher of the Japan Association for Language Teaching (JALT).

McMurray is a professor of cross-cultural studies at Kagoshima International University where he lectures on international haiku. At the Doctoral School, he supervises students doing research on haiku. He is a corresponding school teacher of haiku in English for the Asahi Cultural Center in Tokyo.