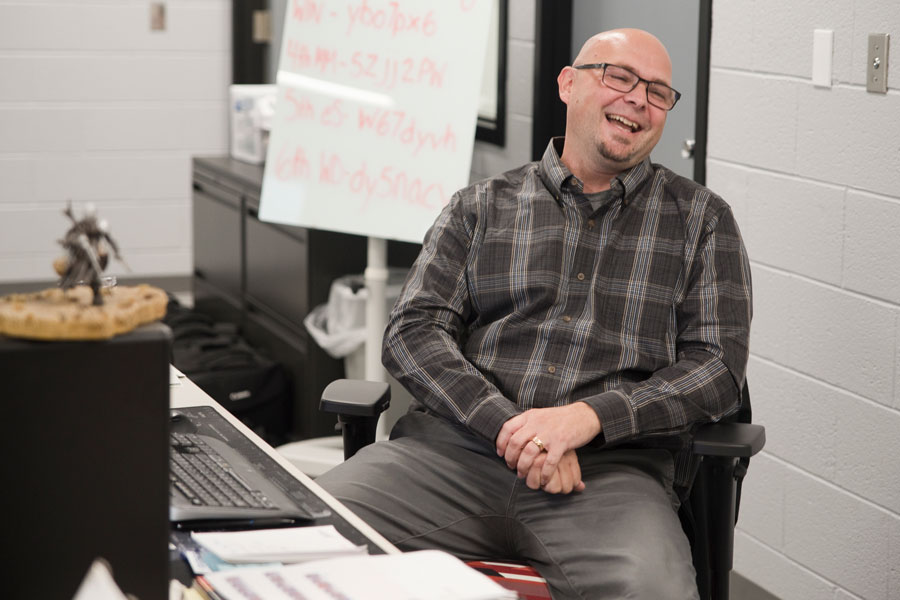 Town of Kent — It’s a Monday morning in Jeremy Smith’s multimedia class, which he begins by surveying his high school students during their weekends – volleyball and soccer team wins, first place in the marching band competition, a 15th anniversary. Then he gives them their recap for the week ahead: fill out forms to start selling directory ads; create sports graphics for this week’s college games; finish making videos for athletics and homecoming.

“You’ll finish them all, I’ll watch them, and then I’ll pick the best one,” he tells his students of the videos. “So any questions about what we’re doing today?” Finish the videos – let’s go!” he said, clapping his hands.

The students all turn around and get to work on their computers, including seniors Savannah Miller and Izabella Arechinga. They’re creating a profile of math teacher Erik West for Academic Spotlight, a new series the district has launched to showcase its instructors. It features photos they took of West teaching math by timing students running 40 yards on the football field.

“We have a class photo at the end,” Savannah points out. “I think it would be cool to put it in there.”

They both enjoy this stuff, looking back at the photos they’ve taken, retouching them, and showcasing the work of other teachers. They love how Smith challenges them with new skills while keeping things light.

“I think he’s a good teacher,” adds Savannah. “He’s really fun, but he also makes sure we do (our job). We are always doing something in class and we are learning. He really cares about the students.

“I love what I do every day”

Talk to Jeremy Smith for a few minutes and you will understand how much he cares about his students.

“Students are so much fun,” says Smith, in his 25e year teaching at Kent City. “There’s just an energy that students bring and a perspective. They are creative and kind. We have wonderful children in Kent City.

“The way the kids are pushed individually to do this work in the projects they have – it’s a real joy.”

For Smith, it’s about teaching something he loves to the students he hopes to equip for a fulfilling future.

“One of my wishes for every student is that they get a job that they love as much as I love teaching, because I’ve been enjoying what I do every day for 25 years,” he says. “A lot of people don’t like what they do, and I love that.”

Smith discovered his passion for teaching after graduating from Maple Valley Junior/Senior High School in Vermontville and then enrolling at Grand Rapids Community College. Calculus convinced him that an engineering major wasn’t for him, but he enjoyed giving history lessons to other students.

This enthusiasm led him to study computer science and history at Grand Valley State University. He then continued his career at Kent City, where he taught elementary, middle and high school. This semester, he teaches about 140 students in computer applications, graphic design, web design, and an eSports club.

‘We are always doing something in class and we are learning. He really cares about the students.

Its multimedia course is particularly popular, providing students with an entry into high-tech graphics, photo and video skills while uploading their work to platforms for the entire school system and community.

“It’s kind of cool to know that, like, you did that,” says Justin Mack, senior, as he works on the graphics for a Homecoming Dress Up Days video.

“He made us want to be there”

Justin and his classmates showcase their school’s athletic programs on the district’s website, YouTube channel, and Facebook page, as well as on Twitter and creating the school yearbook. Their editing and graphic work also gives love to Homecoming, Marching Band, Academic Honors, and other school achievements, with Smith and a pro managing plenty of photos and videos.

Twice a year they produce an eye-catching online newsletter featuring photos and stories of the year’s activities. And this year, they’re splashing football player graphics onto the stadium’s new video board.

“There’s just an energy that students bring and a perspective. They are creative and kind. We have wonderful children in Kent City.

Superintendent Bill Crane, Smith’s former high school principal, calls him “a phenomenal teacher”, crediting his ability to connect with all students. “The way kids are pushed individually to do this work in the projects they have – it’s a real joy,” Crane says.

He should know. Her daughter Addyson took several courses from Smith, including multimedia where she handled a heavy editing load (including a senior video with honors) before graduating last spring. She is now studying Broadcasting and Film Arts at Central Michigan University, where she did editing and camera work for live broadcast station CMU News Central.

“I would say without a doubt that the courses got me to where I am today,” says Addyson, who is considering a career in media. “Mr. Smith was always very understanding, listening and helping. He always made the class fun. He made us want to be there.”

Count Seth Vanderwest as the one who wants to be there. In addition to the multimedia course, the senior writes for the Kent City Athletics website and for Local Sports Journal, covering games in the Kent City area. He appreciates both the support and the creative freedom that Smith offers him.

“He explains what we need to do and then he lets us do our thing,” Seth said of working on a Homecoming video. “He’s really complimentary too. He’ll just walk around and say, “Good job, you’re doing a great job, I like the way you did that.”

This Monday morning, Smith gives a lot of ground to cover as he walks through the class, while helping students learn new skills. “Good work!” he exclaims. “Don’t forget to save!” »

With so many projects going on, it’s all a bit chaotic — in a good way, Smith says. Students know that their work will be viewed hundreds of times, so they had better get the facts straight and correct the spelling.

“It puts a lot of pressure on them, but it gives them such a great sense of accomplishment,” he says. “When I say ‘OK, it’s posted’, they go to their phone and they’re like, ‘This is it! It’s live! It’s on Facebook!’”