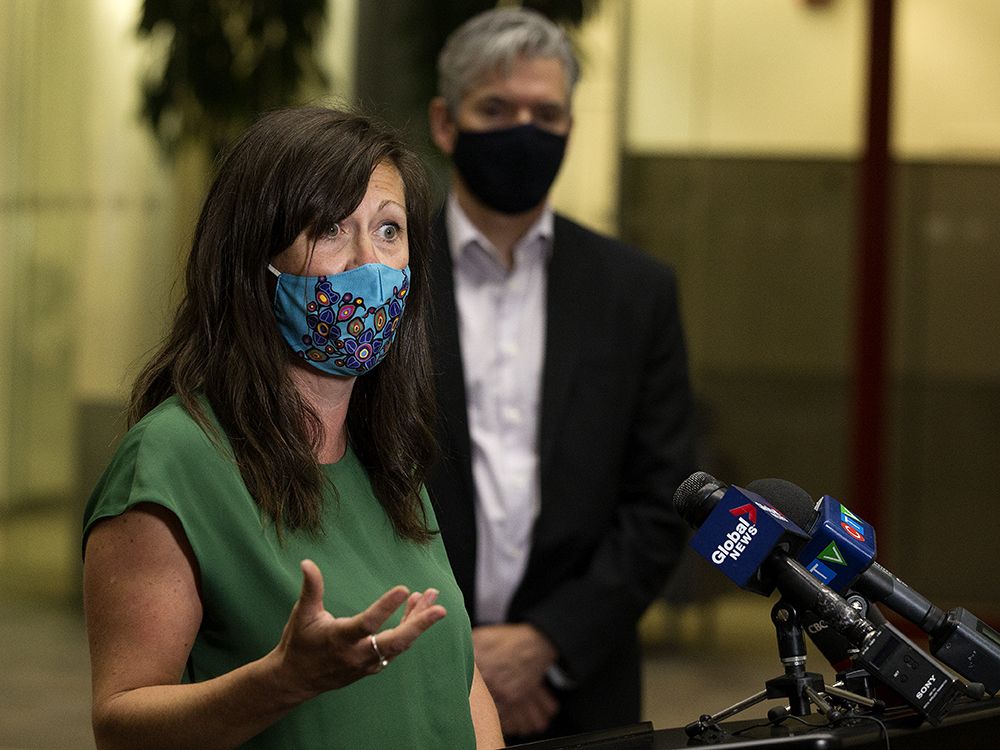 The Edmonton Public School Board is asking Alberta’s Chief Medical Officer of Health for thresholds to determine when mandatory isolation and masking should be put in place as respiratory illnesses in classrooms reach record numbers.

The motion, which was passed unanimously at a special meeting of the board on Tuesday morning, also calls for when schools are in an outbreak state, the Chief Medical Officer, alongside the government of the Alberta, reinstate safety protocols like masking to help reduce the spread of the disease.

Sign up to receive daily news from the Edmonton Journal, a division of Postmedia Network Inc.

The next issue of Edmonton Journal Headline News will soon be in your inbox.

The request for clarification comes after the school district saw an increase in student absence rates due to illness, surpassing 13% on Nov. 7. More than 150 schools have met or exceeded the 10% threshold for contacting Alberta Health Services during an outbreak as of Nov. 7. Council noted that a recent decision by the Alberta Court of King’s Bench also concluded that the Government of Alberta had acted “unreasonably” lifting a COVID-19 mask mandate for schools last winter.

After the meeting, EPSB chair Trisha Estabrooks told reporters the board was asking for information and data.

“As I said in the meeting, why are we reading about what is happening with the current pandemic in the media? School boards are here to be partners and we want to be treated as partners as we continue to navigate this global pandemic. »

In a statement, Department of Education spokesperson Emily Peckham said student safety remains a priority for the provincial government.

“The Government of Alberta will review any letters received from Edmonton Public Schools and act appropriately, taking into account any advice from the Chief Medical Officer of Health,” Peckham said.

“Our government will not implement any further child masking mandates in Alberta’s K-12 education system. We encourage anyone who feels comfortable wearing a mask to do so.

“There is a critical situation that we are seeing in our schools and so we are doing everything we can as a division to make sure that message gets out to decision makers,” she said. “When I say policy makers, I mean health officials. Health officials must make health decisions.

Estabrooks said the school board itself does not have the authority to implement health measures, however, the superintendent would because he has authority over operational matters, but with “important nuance.”

“The superintendent must take the advice of health officials, recognizing that he and his team do not have that expertise,” she said. “One of our guiding principles throughout this pandemic has been to follow the advice of AHS and our CMOH and that has not changed.”

During the meeting, Supt. Darrel Robertson said he was not a medical expert and relied on them to provide advice. Because schools aren’t just dealing with COVID-19, but influenza and respiratory syncytial virus (RSV), Robertson said CMOH’s guidance is needed to determine what’s reasonable to mandate in schools.

“This issue is so divisive in the community that it makes it, practically speaking, a challenge for schools to enforce in the absence of health orders,” he said.

Robertson said there is work to be done to encourage families and students to wear masks, not require them to do so.

“COVID is not going away. The flu seems to be particularly bad this year from what I’m hearing, but again I’m not a health official so I don’t have that first hand knowledge “, he said. “This is where more clarity from our health officials would really help. We are in different territory right now than we were even during the pandemic.”

During a virtual media briefing with Alberta Health Services officials on the current respiratory disease season on Tuesday afternoon, Dr. Christopher Sikora, Edmonton Zone Medical Officer of Health, said a multitude of pathogens cause absenteeism in schools, and that there is no single one that primarily contributes to sickness rates.

It is reassuring that parents keep children at home and absenteeism is better than spreading disease in a school environment, he said.

Asked about the recommendations, Sikora said wearing a mask in indoor public spaces can prevent individuals and others from being exposed to respiratory illnesses.

“The recommendation we are considering from our partners at the Public Health Agency of Canada is that wearing a mask in indoor public places is something useful, beneficial and can help you stay safer and healthier, but also those around you are safer and healthier as well,” Sikora said.