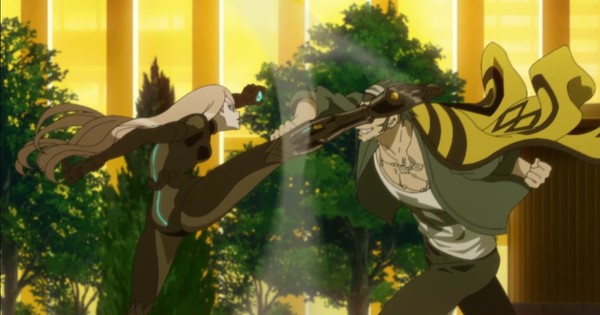 How would you rate episode 11 of
Tribe Nine? Community Rating: 3.3

Anyway, back to the episode in question: our lord and savior Lord Ojiro is ready to make an appearance after definitely committing murder, but first the Minato tribe must be deemed worthy enough to face our masked liege. So naturally, Senior Secretary Kamiki Yui assembled a team of elites. Get out, Queen! It’s time to hit the bat and see how things go.

But like I said: First, let’s have a message from sadboy Haru, which comes after the Minato Tribe got a taste of the opposition’s greatest hits…literally. What does our drummer have to say? Oh, just a confession to team leader Saori. That’s it: I’m not kidding, this is serious. It almost gave me back my laptop, but I didn’t because the technology is expensive and, in this pandemic, hard to come by. Also, my computer is nice, which is what this episode tries to be, but needs to become.

Luckily, after that utterly underwhelming tidbit and goofy diagetic music (as well as the stark realization that Saori is one of this series’ two central women), episode 11 and the usually hard-hitting soundtrack come together for a battle of epic baseballertude, Minato Style tribe. And I wish I could say it was engaging, but honestly the jar of mediocre Sour Patch Watermelon candy on my desk amused me more than half before I Tribe Nine never could. I swear, my relationship with this anime is horrible: I’m like a tragic love in a romance novel. I keep thinking “Maybe, Tribe Nine will finally love me. I keep mumbling, “Maybe it’ll still be good like in the first arc.”

That said, things went well when I started cheering on the bad guys, which I don’t think was the intention. Oh, and it went well when the Adachi tribe crew showed up, which gave me the idea that they were all dead. (I think I posited this at some point: I’m gradually losing touch with the ideas I made up in my head and the ideas I actually put into a review.)

Let’s get back to cheering on the bag guys because…it definitely comes back when Yui (i.e. Junko Enoshima) actually enters the mix, which is the saving grace of this episode. Bonus for the fact that she A) kicks the baseball instead of throwing and B) wears a futuristic jumpsuit. As feminist as I am, I fall for a villain in a catsuit. Gotta destroy dreams while being beautiful, you know? (Also C) she runs Naruto and that’s always a bonus in my books.)

If Episode 10 was meant to up the ante, then Episode 11 is an adequate follow-up that… got better the more I watched. It’s enough to make you somewhat excited for this series to end and resolve, with diegetic Background music it’s tasty enough to season this bland series a bit. It always gives me a boost, but I also find myself always grateful for Funimation giving me the runaround with this series. I guess that’s the best compliment I can give for a series that has resolved itself in a way that gives me Final Fantasy: Advent Children culminating atmospheres. I sincerely hope it plays out with the same ridiculous energy when all the tribes naturally ban the Chiyoda tribe and put the “fun” back into extreme baseball because…why not?

with the extra three-quarters of a star for Sonoda Fucho’s thirst on Yui because…same.

Mercedez is a JP-EN translation and localization light novel editor and proofreader/QA, pop culture critic, and journalist who, when not writing for ANN, writes for Anime Feminist, where they serve as editors. . They are also frequent co-hosts of the Anime Feminist podcast, Chatty AF. This season, they think back to their youth with Akebi Sailor Uniform. When they’re not writing and editing, you can find them on their Twitter or on their Instagram where she is always up to something.