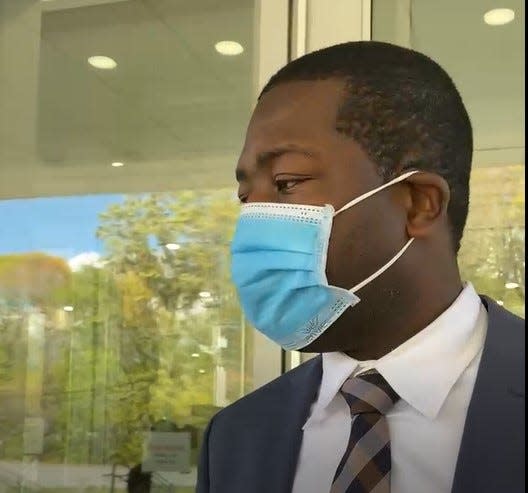 PROVIDENCE — A former school administrator has filed a whistleblower lawsuit claiming she was fired from her job because she reported too many close contacts after testing positive for COVID-19.

In a civil lawsuit filed in Providence on January 26, Cassandra Johns of Warwick alleges that she was fired from her position as an educational support manager for following state, local and school protocols around COVID.

She specifically accuses Olayinke Alege of retaliating against her.

Alege was a high-ranking network administrator who quit this spring after being accused of assaulting a boy at a gymnasium in Warwick. He has since contested his arrest.

The suit names the Rhode Island Department of Education, which has state control over the city’s public schools; Angélica Infante-Green, state education commissioner; and Acting Superintendent of Schools. Javier Montanez. He also appoints the treasurer of the city of Providence, James J. Lombardi III.

On November 20, 2020, her partner contracted COVID. Johns immediately left Nathan Bishop Middle School and told her direct supervisor, Michael Comella, that she had to quarantine for two weeks. The next day, she started showing symptoms of the virus. She tested positive on November 25.

Donna O’Connor, the district’s chief nursing officer, asked Johns to provide a list of employees who may have been exposed. Johns gave O’Connor his “search log”, which lists 11 people.

Johns was cleared by her doctor to return to work on December 3.

But that same night, her supervisor told her that he was not ready for her to return and that she “needed to regain confidence”. He also told her that she would be working at a “downtown” location – the basement of the district office at 797 Westminster St.

After spending five days working in the basement, Johns requested a meeting with his supervisor and colleges executive director James Boyd.

Johns was invited to meet Alege on December 14. During that meeting, her supervisor accused her of disrupting the college by placing so many names on her contact list, which meant they had to self-quarantine.

Two days later, Johns encountered Alege again. This time, she claims that Alege fabricated baseless allegations against her, including that she discussed the directors’ confidential notes.

“So,” the suit says, “Dr. Alege got straight to the point, telling him that ‘you don’t use good judgment and have a hard time thinking about what you’ve done wrong.'”

In a subsequent meeting, Alege reiterated that he was “losing faith in Johns, that he had an increasing level of concern,” the lawsuit states.

Alege then reportedly said he was removing Johns from his post and asked if she wanted to return to class. She said no.

A few days later, Johns said she had been assigned to another long-term replacement position whose position would end in June. Additionally, Johns was told she would be teaching English as a second language, which she was not certified for.

“The plaintiff realized that she was given this substitute teaching position to humiliate her after being a prominent district administrator,” the lawsuit states.

“It appears that the retaliatory termination of the plaintiff from her position as educational support officer by the defendant … destroyed the plaintiff’s career as an educational administrator,” the suit states.

Johns seeks to recover her administrative position or receive salary and benefits until she finds a similar job. She is also asking for all the wages and benefits she lost after being assigned to less important work.

The state Department of Education could not immediately be reached for comment.