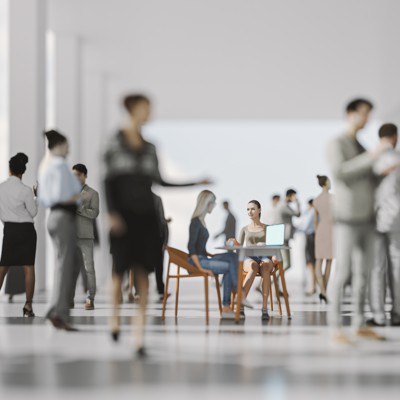 From crowds to power couples, the science of networks reveals the hidden structure of community dynamics

The world is a networked place, literally and figuratively. The field of network science is used today to understand phenomena as diverse as the spread of misinformation, West African trade, and protein-protein interactions in cells.

Network science has discovered several universal properties of complex social networks, which in turn have made it possible to learn the details of particular networks. For example, the network formed by the international financial corruption scheme uncovered by the Panama Papers investigation has an unusual lack of ties between its parts.

But understanding the hidden structures of key elements of social networks, such as subgroups, has remained elusive. My colleagues and I have found two complex patterns in these networks that can help researchers better understand the hierarchies and dynamics of these elements. We found a way to detect powerful “inner circles” in large organizations simply by studying the networks that map emails sent between employees.

We have demonstrated the usefulness of our methods by applying them to the famous Enron network. Enron was an energy trading company that perpetrated large-scale fraud. Our study further showed that the method can potentially be used to detect people who wield enormous soft power in an organization, regardless of their official title or position. This could be useful for historical, sociological, and economic research, as well as government, legal, and media investigations.

From pencil and paper to artificial intelligence

Sociologists have constructed and studied smaller social networks in painstaking field experiments for at least 80 years, long before the advent of the Internet and online social networks. The concept is so simple that it can be drawn on paper: entities of interest – people, companies, countries – are nodes represented by dots, and relationships between pairs of nodes are links represented by lines drawn between the points.

Using network science to study human societies and other complex systems took on new meaning in the late 1990s when researchers discovered some universal properties of networks. Some of these universal properties have since entered mainstream pop culture. One concept is Kevin Bacon’s Six Degrees, based on the famous empirical finding that two people on Earth are separated by six or fewer bonds. Similarly, versions of statements such as “the rich get richer” and “winner takes all” have also been replicated in some networks.

These global properties, that is to say applying to the entire network, seem to emerge from myopic and local actions of independent nodes. When I connect with someone on LinkedIn, I certainly don’t think about the overall consequences of my connection on the LinkedIn network. Yet my actions, and those of many others, ultimately lead to predictable, rather than random, results in the evolution of the network.

My colleagues and I have used network science to study human trafficking in the UK, the structure of noise in the outputs of artificial intelligence systems, and financial corruption in the Panama Papers.

Groups have their own structure

In addition to studying emerging properties such as Kevin Bacon’s six degrees, researchers have also used network science to focus on issues such as community detection. Simply put, can a set of rules, also known as an algorithm, automatically discover groups or communities within a set of people?

There are hundreds, if not thousands, of community detection algorithms out there today, some relying on advanced AI methods. They are used for many purposes, including finding communities of interest and uncovering malicious groups on social media. Such algorithms encode intuitive assumptions, such as the expectation that nodes belonging to the same cluster are more densely connected to each other than nodes belonging to different clusters.

Although an exciting field of work, community detection does not study the internal structure of communities. Should communities be considered only as sets of nodes in networks? And what about small but particularly influential communities, such as inner circles and mobs?

In a way, you probably already have an idea of ​​the structure of very small groups in social networks. The truth of the adage that “a friend of my friend is also my friend” can be tested statistically in friendship networks by counting the number of triangles in the network and determining whether that number is greater than the chance alone could explain. And indeed, numerous social media studies have been used to verify this claim.

Unfortunately, the concept begins to break down when extended to groups of more than three members. Although patterns have been well studied in both algorithmic computing and biology, they have not been reliably linked to influential groups in real-life communication networks.

Building on this tradition, my PhD student Ke Shen and I have found and presented two structures that seem elaborate but turn out to be quite common in real-world networks.

The second structure is similar but assumes there is no central triangle and the inner circle is just a pair of nodes. A concrete example might be two co-founders of a startup like Google’s Sergey Brin and Larry Page, or a power couple with shared, common interests in global politics, like Bill and Hillary Clinton.

We tested our hypothesis on the Enron email network, which is well studied in network science, with nodes representing email addresses and links representing communication between those addresses. Despite being elaborate, not only were our proposed structures present in the network in greater numbers than chance would predict, but qualitative analysis showed that there is merit in claiming that they represent influential groups. .

The main characters of the Enron saga are now well documented. Curiously, some of these characters don’t appear to have had much official influence, but may have wielded significant soft power. One example is Sherri Reinartz-Sera, who was the longtime administrative assistant to Jeffrey K. Skilling, the former CEO of Enron. Unlike Skilling, Sera was only mentioned in a New York Times article following investigative reporting that took place during the scandal. However, our algorithm discovered an influential group with Sera occupying a central position.

Society has complex structures at the level of individuals, friendships and communities. Mobs aren’t just motley groups of characters talking to each other, or a single ringleader calling the shots. Many crowds or influential groups have a sophisticated structure.

Although much remains to be discovered about these groups and their influence, network science can help uncover their complexity.

This article is republished from The Conversation under a Creative Commons license. Read the original article.