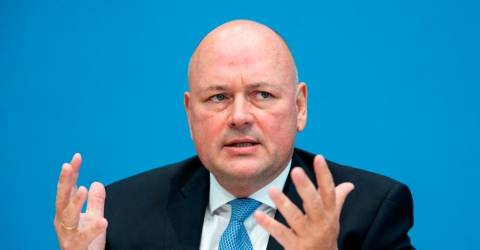 German cybersecurity chief to be sacked over alleged ties to Russia: sources

BERLIN: Germany plans to fire Arne Schoenbohm (pictures)the head of the national cybersecurity agency BSI, after reports that he had contacts with the Russian intelligence services, government sources told AFP on Monday.

The Home Office said it was “taking the reports seriously” and “investigating them thoroughly”.

Schoenbohm co-founded a Berlin-based association known as the Cyber ​​Security Council Germany in 2012, which advises businesses, government agencies and policymakers on cybersecurity issues.

This association is now criticized for alleged contacts with the Russian secret services.

According to an investigation by a popular satirical program on broadcaster ZDF, Schoenbohm still maintains contact with the association.

The Handelsblatt daily reported that there was “great discontent” within the government over the allegations.

The Home Office is “looking at all options on how to handle the situation”, he said.

The Cyber ​​​​Security Council Germany denied the allegations in a statement posted on its website on Monday, calling them “absurd”.

The most high-profile incident blamed on Russian hackers to date was a cyberattack in 2015 that crippled the computer network of the lower house of parliament, the Bundestag, forcing the entire institution offline for days on end. that it was fixed.

Russia denies being behind such activities.

Tensions between Russia and Germany have only escalated since Moscow’s invasion of Ukraine.

The BSI has warned that businesses, individuals and critical infrastructure are at risk of being hit by Russian cyberattacks.

The charges against Schoenbohm came as German police investigated an act of “sabotage” on the country’s rail infrastructure, with some officials pointing the finger at Russia following the Nord Stream pipeline explosions.

Important communication cables were cut at two sites on Saturday, forcing train services in the north to be interrupted for three hours and causing travel chaos for thousands of passengers.-AFP