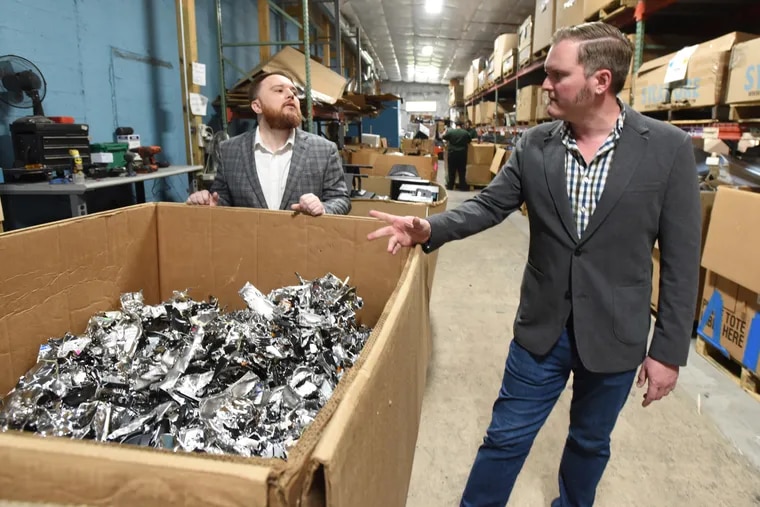 Where old digital devices are restored or destroyed

Wilson Jaffa handles an old Chromebook the way many of us can only dream of dealing with an uncooperative laptop: he takes it apart, piece by piece, in a very short time.

Using an electric screwdriver, Jaffa, a technician at Chester County electronics recycler Sycamore International Inc., removes the Chromebook’s cover and loosens the circuit board. He pulls out the precious microprocessor, like an oyster sheller in a shellfish farm. One by one, the computer parts containing precious and rare materials are stripped and thrown into garbage cans: the battery, the memory chips, the storage media, the printed circuits, the LCD screen.

Each week, a regular parade of trucks full of old digital devices arrives at the Sycamore loading dock in West Grove, where the devices are sorted into two streams. Obsolete machines are dismantled by technicians like Jaffa, and recycled into parts or materials. Usable devices are refurbished after following a secure process to destroy all data. Each week, four tractor-trailer loads of dismantled or refurbished devices leave the facility.

“We’re excited about the future of this whole industry,” said Steven Figgatt, 36, who started an electronics remanufacturing business in his mother’s basement in West Chester, expanded into a garage, then moved into an old 28,000 square foot mushroom house. -Growing barn in West Grove that Sycamore International calls home. He named the business after his favorite tree.

There is no shortage of raw materials for processors such as Sycamore. Americans generated an average of 46 pounds of e-waste per person in 2019, according to the United Nations’ Global E-Waste Monitor, and only about 15% of that was recycled. US e-waste, which includes metals such as gold, palladium and silver, is valued at around $14.2 billion, according to the UN

In the world of e-waste, where several Philadelphia-area companies operate successfully, Sycamore International has developed a niche: education. It pays school districts and universities in Pennsylvania, New Jersey, Delaware and other mid-Atlantic states to collect and dispose of their old student laptops. Figgatt says Sycamore works with school districts that have a total enrollment of 1.8 million students.

Sycamore also collects other e-waste from schools for the convenience of its customers and also conducts community drop-offs at its West Grove location. But its business is focused on laptops. It employs around 70 people and plans to build a new facility on its 15-acre property, doubling its footprint. Figgatt also sees a growth opportunity in recycling old servers and networking equipment from data centers, which seem to be constantly upgrading their systems.

Selling the sorted pieces of electronics is profitable at best, said Jim Maguire, Sycamore’s vice president of accounts. Nothing goes to waste: there’s a buyer for just about everything, from recyclers who turn shredded hard drives into metal components, or processors who reuse lithium in old batteries. There are even buyers for plastic cases and keyboards.

But sorting everything out takes a lot of work. Memory chips called RAM are separated according to whether they can be reused as a memory chip. If they are obsolete, they are sorted according to whether they contain traces of gold or silver. All batteries can explode, so they must be removed from devices and cannot be shredded. Then they have to be sorted by chemical content, up to 20 different types. Lithium-ion batteries are the most valuable and cost about 67 cents a pound, Figgatt said.

But Sycamore’s day-to-day business is not dismantling devices, but reconditioning old machines for resale. Its technicians clean and test the devices, and Sycamore wholesales them to resellers. He also sells a few refurbished Apple laptops and iPads at his Mac Mutt Factory Store in West Grove.

The serial number of each computer is recorded when it enters the facility and when it leaves it. Labels and stickers are removed from devices so that the previous owner cannot be identified. “Some kids put stickers all over their computers,” Figgatt said. Every month Sycamore puts 30,000 refurbished laptops back on the market.

About 60% of its refurbished devices are sold in the United States, mostly to online retailers. But a growing volume is being exported via Dubai in the United Arab Emirates to East Africa, North Africa and Indian Ocean countries, where there is a strong market for affordable internet-ready devices, a said Figgatt.

“I’ve visited clients there, and it’s amazing what they’re doing with these assets,” Figgatt said. A Dubai buyer just wants thousands of wired computer mice to refurbish. Another buyer installs new circuit boards in old LCD TVs and sells them as refurbished units after Sycamore removes the damaged circuitry.

Resourceful companies in developing countries are able to restore and resell many devices that would not be profitable to refurbish in the United States, Figgatt said. “There is far more demand for secondary technology in the United States than we could ever satisfy,” he said.

As a Certified IT Asset Disposal (ITAD) facility, Sycamore International follows strict standards for handling and disposal of materials. The same goes for how data is destroyed on digital devices. The company adheres to data destruction standards established by the Department of Defense and the National Institute of Standards and Technology.

Files that have been erased by a computer user can be recovered by a hacker unless the data undergoes a laborious overwriting procedure that can take several hours to erase each hard drive. This means that at any one time, hundreds of Sycamore computers are plugged in, causing their hard drives to be wiped.

With so many laptops undergoing digital sanitization, Sycamore’s process is energy-intensive.

Figgatt is so committed to the “circular economy,” in which resources are reused wherever possible, that Sycamore this year installed a rooftop solar panel and a new iron-on-flow storage battery system. place to ensure that the business operates as it does. renewable energy microgrid. Even though the regional power grid is down, Sycamore’s lights stay on.

Beyond green power goals, there was a practical business reason for building a microgrid: if an outage interrupts the data-erasing process, Sycamore is obligated to start the process over again, per standards. “If you’re halfway through processing all those hard drives and the power goes out, all those systems need to be restarted,” Maguire said. “So it’s like an immediate loss of production.”

Figgatt says e-waste is recycled at a higher rate in New Jersey and New York, which have credit systems in place to help pay for the collection and safe disposal of the products. The program is funded by royalties from the sale of the devices.

State Rep. Mike Zabel (D., Delaware County) last month circulated a memorandum seeking co-sponsors for legislation that would expand Pennsylvania’s Covered Appliance Recycling Act, a 2010 law which critics say does not guarantee Pennsylvanians easy access to recycling facilities. The program would be funded by a levy added to the price of new electronics sold in Pennsylvania. Zabel proposed similar legislation last year, but no bill has been introduced.

Revenue from a state-sponsored recycling credit system could offset the impact of several downtrends forming on Sycamore International’s business model.

Commodity prices for materials mined from laptops have fallen this year, a potential recessionary signal that is prompting Sycamore to cut the price it pays school districts. And Maguire says schools increasingly seem to prefer cheaper Chromebook devices to more durable PCs and Macs.

“We’ve seen breakage rates of around 30% in the first year of Chromebook rollouts, according to the district,” Maguire said.

Perhaps unsurprisingly to parents, young teens are the biggest test of the durability of electronic devices, Figgatt said.

“College kids are the worst,” he said. “Elementary schools, they treat their assets well. High school students, pretty good. But there just seems to be something in the psychology of college kids.

Google has also baked in obsolescence on its Chromebooks as it stops updating the operating system after several years, Figgatt said. This means Chromebooks are being taken out of circulation and dismantled at a higher rate than more expensive devices, rather than refurbished and resold. For Sycamore’s business, there is more value in reusing than recycling.